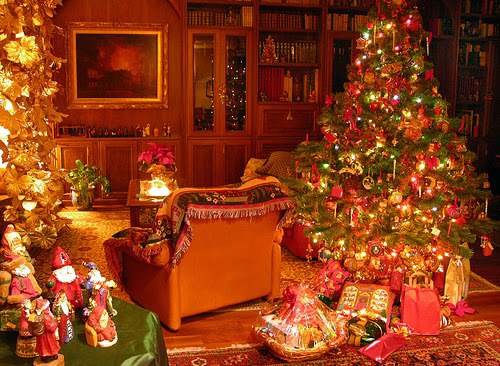 In brief, the standard academic critique of mChristmas is that it trivializes our emotions with false and shallow sentimentality, and helps to foster a culture of greed, commercialism, excess, and rampant spending on things we neither need or want. No observer of the contemporary Christmas season can deny that there really is much false sentimentality and corrupt consumerism at Christmas time. This is true and those things are rightly condemned.

The problem is that academics are very narrow-minded. They reduce everything to a singular phenomenon, a unified purpose, and they are often incapable of seeing outside the colored goggles of their favorite ideology. In general, anything enjoyed by a majority of people is frowned upon and dismissed by the professors who sit atop their ivory towers feeling smug and superior, above the common and duped rabble.

I know few - if any - people who are really concerned with presents and hallmark card sentimentality. Most people find Christmas a time to remind them that what matters most in life is Peace on Earth and Good Will toward all. Yes these phrases have been abused and over used. That does not drain them of their meaning.

Christmas reminds us to cherish our loved ones, to value our relationships, to reach out to those in need. Undoubtedly we should do this all year long. We should always value our relationships, cherish our loved ones, help the poor and needy. No doubt the pretentious critics of Christmas will bellow at me that "we don't need a special day for this stuff! We should always bear peace and good will." Indeed we should. But reminders help.

A special season devoted to what is best in human nature is a reminder to always be our best. We too easily get lost in the hustle of everyday life. Setting aside a day, indeed, an entire "season" to remember what matters most in life, can be a powerful motivator for the rest of the year.

By all means let us damn consumerism. Let us fight false sentimentality tooth and nail and refuse to participate in it. But this is only a superficial surface. What Christmas has always been about is none of these vile things.

This Christmas let us turn to the message of Peace, Joy, Love, and Good Will that Christmas is really all about. Let us join Ebenezer Scrooge and learn to honor Christmas in our hearts and keep it all the year.
Posted by Dr. Matthew Wion at 9:22 PM 3 comments:

Norad Follows Santa around the world

Posted by Dr. Matthew Wion at 8:23 PM No comments:

Dickens reminds us what Christmas is really about; and it's not what you think!

Charles Dickens' A Christmas Carol is rightly heralded as a classic that expresses the true meaning of Christmas. But not often for the right reasons.

Most film versions of the classic are overly sentimental. But the Scrooge we meet in the original novel is a man who is utterly devoid of any genuine relationships with other people. He is both dead to himself, and as a consequence dead to others. As Dickens remind us, he is "secretive, solitary, and self-contained as an oyster."

A Christmas Carol is not a Hallmark card about a stingy fellow who learns to be jovial and kind. It's a tale about the willing blindness of a man who will not listen to himself and thus shuts himself off from his fellow human beings.

The larger point is that for Dickens personal growth and transformation is inseparable from social justice and communal responsibility. If we ignore ourselves we will ignore the plight of our fellows. If we awake to ourselves, we cannot help but be moved to aid others when we can. Personal transformation and social justice are intimately linked.

In this vein the following 1972 Animated version of Carol is the best representation I have seen of the book. The film even uses as the basis for its "look" original illustrations from the 19th century.

This film not only gets the novel's concern with social justice and the plight of the poor, but also provides us with images that are very surrealist, reminiscent of a Dali painting or a Bergman film in some ways. The novel itself has these qualities, but they are not usually well captured in the various films.

Enjoy it! And remember what Dickens' Christmas Carol really has to teach us about the holiday season:

Posted by Dr. Matthew Wion at 5:12 PM No comments:

For those who see Christmas as too commercial, Santa is an easy target. The rotund and Jolly image of Kris Kringle is used to market and sell just about everything and then some. Clearly a big commercial plug, the Saint is often thought to be nothing more than a sales pitch.

Santa has also been a favorite target of some Christians who think that the modern Christmas is a purely pagan or secular celebration, with Santa usurping the role of Christ and leading our Children astray.

These reactions are perhaps understandable, but they are historically inaccurate. Santa Claus has been around far longer than the companies that use his image to sell products. Commercialism is neither the origin nor essential nature of Father Christmas.

Furthermore, Christmas has never been an exclusively Christian holiday. The pagan, Christian, and secular have long and happily co-existed as part of the yuletide season. Be that as it may, if people find Christmas too secular, too commercial, too sappy, or too ... whatever, that is their prerogative. I have no interest in defending the Holiday against those who do not care for it. Neither do I care to defend Santa Claus to those who do not wish to "play Santa" for their children. There are many parents who teach their children that Santa brings them gifts on Christmas eve and there are many who do not. I see no evidence that either practice is harmful or damaging to the children in question. So whether one likes Christmas or not, whether one embraces Saint Nick or not, is not my concern.

What I would like to address is what Santa Claus is about. What makes us tell our children stories about a magical saint who brings them toys? What makes children embrace the idea with so much joy? Why do we participate in this odd ritual of pretend? What, exactly, does Santa Claus represent for children?

An easy answer is that Santa brings toys and kids love toys. But that will not do. If it were just about toys, kids would love toys from whomever and not particularly care about Santa himself. But this is not what we find. Just talk to a child at Christmas time and you will see that it is the big man himself that matters to them, far more than the toys he brings. Why should this be so?

I have though long and hard on this matter over the years, and it seems clear to me that Santa is an an image of divinity. This may sound a little silly and strange. But it is actually not too hard to believe. Children approach Santa with just that mixture of awe, love, reverence, and fear, that most peoples traditionally approach their deities.

Santa, furthermore, clearly has the qualities of divinity. He is immortal, he lives in a magical place "up there," he is omniscient, omnipotent, and omnibenevolent. The Saint flies through the sky, can enter any home, "sees you when you're sleeping, knows if you've been bad or good," he even judges you "naughty or nice." To top it off, Santa even has the long white beard of the traditional sky-father deity!

Children, of course, would not call Santa divine; they would not think he was a god, or an image of God. But that is irrelevant. The attitudes children have toward Santa Claus, the qualities he possesses, make him an image of the divine.

So for those who do enjoying sharing Santa Claus with their children, think about what you are really sharing ... without knowing it you are imparting to your children a conception of divinity. A conception that, at its best, is really a rather positive one. In most portrayals Santa Claus is a kind, non-judgmental, and generous man. Perhaps by sharing him with our children, we are helping them to value these qualities, and to see them as the path toward the divine.
Posted by Dr. Matthew Wion at 1:09 PM 3 comments:

Today is St. Nicholas' Day. I think it is good on this day to take some time to reflect on generosity, love, care, and giving. But more than that. Today is also a day for reflection upon social justice and helping those in need.

Nicholas is remembered primarily as the protector of children and the poor, those who could not defend themselves and needed a protector. It is little remembered sometimes that St. Nick is not simply a figure who gives gifts to children, but who helps those who are socially marginalized and in real danger of slipping through the cracks.

The most famous story about St. Nicholas tells of his "gift" of gold in the stockings of three daughters. The gift prevented the girls from being sold into slavery! St. Nicholas did not simply bestow trinkets but battled for social justice. Another famous tale informs us that Nicholas raised back to life three abandoned children who had been murdered by an inn keeper. In both cases St. Nicholas comes to aid and protect those who have been abused and neglected.

Let us reflect upon those who suffer from injustice and poverty. Let us call upon the spirit of justice, care, and generosity that St. Nicholas embodied. Let us try to let that spirit live and work in us this holiday season.

Here you can see the Saint himself arrive to greet adoring admirers:

Posted by Dr. Matthew Wion at 7:00 AM No comments: