In Defense of Erin Andrews and her Wardrobe

Erin Andrews is now being attacked for wearing "sexy" outfits on dancing with the stars. First by Elizabeth Hasselbeck and now by the New York Daily article. Here is what the Daily piece claims:

Andrews' "Dancing With the Stars" stint fulfills a longtime dream. Dancing has been her own sport; she was a member of the University of Florida Gators basketball dance team while at the school. Can't a female journalist dance?

Let's face it: Andrews is a sports sidelines reporter. While she undoubtedly knows the games she covers, she's still there as eye candy.

She was voted America's Sexiest Sportscaster - twice - by Playboy, and accepted the kudos. She's posed for racy photoshoots in Sports Illustrated and GQ. She has sought celebrity.

But when when the peephole perv story broke and the paparazzi transformed her from storyteller to The Story, she called 911 and yelled to the operator, "I'm being treated like f---ing Britney Spears!" (Ironically, she employs Spears' stylist Paige Geran to dress her for her ESPN gigs.)

Now that "Dancing with the Stars" is over, Andrews is going to have to decide whether she wants to be a proper journalist or continue to be a journalistic lightweight who's light on her feet.

This is the classic problem of seeing women as either "sex objects" or as someone we should take seriously. They cannot, on this view, be both. That is sheer nonsense, and it should not be allowed to pass without response. A woman has every right to celebrate her body and to be taken seriously as a professional. Furthermore, Ms. Andrews' outfits on dancing with the stars were hardly as objectionable as this article would have it; but even if they were, that does not nullify her skills as a journalist.

The worst part of this article is its rather shocking implication that Andrews deserves to be objectified because she has accepted playboy's claim that she is sexy (where by the way, is the proof for this assertion? Furthermore, what does it even mean?!), and employs Britney Spears' stylist. This is outrageous and plays to the absurd prejudice that women are somehow at least partially responsible for cases in which they are reprehensibly exploited.

Erin Andrews has posed for sexy pictures. Erin Andrews bared some flesh for dancing with the stars. Erin Andrews is quite a beauty. So What? This has no bearing on her ability as a journalist and it should not effect our assessment of her skills, nor the level of professionalism she is accorded as an ESPN broadcaster.

I for one think Ms. Andrews (and any other woman) has every right to bare her mid-section AND be taken seriously as a journalist.

Posted by Dr. Matthew Wion at 8:45 PM No comments:

On the Church calendar today was Pentecost. For those who do not know, Pentecost is the day set aside to recognize the founding of Christianity as a new religion. The story in Acts 2 is as follows:

When the day of Pentecost had come, they were all together in one place. 2And suddenly from heaven there came a sound like the rush of a violent wind, and it filled the entire house where they were sitting. 3Divided tongues, as of fire, appeared among them, and a tongue rested on each of them. 4All of them were filled with the Holy Spirit and began to speak in other languages, as the Spirit gave them ability. 5Now there were devout Jews from every nation under heaven living in Jerusalem. 6And at this sound the crowd gathered and was bewildered, because each one heard them speaking in the native language of each. 7Amazed and astonished, they asked, “Are not all these who are speaking Galileans? 8And how is it that we hear, each of us, in our own native language? 9Parthians, Medes, Elamites, and residents of Mesopotamia, Judea and Cappadocia, Pontus and Asia, 10Phrygia and Pamphylia, Egypt and the parts of Libya belonging to Cyrene, and visitors from Rome, both Jews and proselytes, 11Cretans and Arabs—in our own languages we hear them speaking about God’s deeds of power.”

As history it won't work. In the Jewish Tradition the Law was given on Pentecost. The author of Acts is simply using that date to have the "New Covenant" given on that same day. This is parable, not history (as if the flaming tongues and gift of languages were not enough to reveal that!).

In fact, it seems quite clear that the author is presenting this event as an undoing of the Tower of Babel. The Tower of Babel is that myth in the book of Genesis wherein God divides the human race by forcing them to speak in multiple languages, making them incomprehensible to each other.

What the author of Acts is saying is that the Holy Spirit which comes to the believer by the spirit of the Risen Jesus reverses this division and instead brings all together in unity. The great barriers separating humanity are conquered in the Spirit of the Risen One. As the ministry of Jesus was defined by breaking down the barriers that divide us from each other, this story is an admirable recognition of that same power alive in those who follow him.

The symbolism of reunification is very clear from the beginning of the the text. We are told that "they were all together in one place," and, lest we should still not get it, the Author ends his story of Pentecost with the following account of the life of the Early Jesus movement:

44All who believed were together and had all things in common; 45they would sell their possessions and goods and distribute the proceeds to all, as any had need.

It is not too surprising that the early Jesus movement "had all things in common," as Jesus himself seems to have lived this way and taught others to do the same ( see Luke 9:58, & Luke 18:18-25). And this passage should be read very carefully by those who champion big corporations and unregulated markets before they declare that they truly follow Jesus. But that is not my point here.

Historians of early Christianity are certain that Christianity as a religion separate from Judaism cannot be dated to before the destruction of the Jewish Temple in 70 A. D. And the break is not complete until the early second century. Pentecost therefore, cannot really be about the founding of a new faith.

What Pentecost is about is unity. The world is and always has been deeply divided. These divisions all too often cause harms. The story of Pentecost tells us that division is not final, that we need not cave to it. Beneath our divisions there is a unity. That unity can be grasped, can be seen, can be lived.

As far as history is concerned the Apostles never did speak in multiple languages at once. Neither can we. But perhaps, if we but let ourselves be "filled with the Holy Spirit" we can come to understand each other and finally all come "together in one place."
Posted by Dr. Matthew Wion at 10:47 PM No comments:

The Gospel of Cornel West 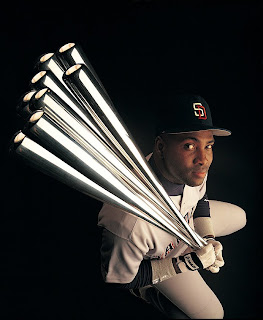 Anthony Keith Gwynn
May 9th, 1960
Tony Gwynn, The Hall of Famer, with 3,141 hits, .338 lifetime batting average, 8 Batting Titles, 5 Gold Gloves, 15 time All-Star and 20 seasons with one team! All amazing accomplishments and now he is turning the big 5-0! Mr. Padre, Tony Gwynn, means a lot to the city of San Diego and a lot to Padres fans. He is certainly the best hitter of his time, and one of the best of all time. (In my opinion second only to Ted Williams). Having grown up a San Diego Padres fan, I wanted nothing more than to meet Tony Gwynn since I was 2 years old. I waited 20 years to meet the man. No matter what, I always seemed to miss him. Then finally, in 2008 I met him. I tell you it was worth the wait. Tony Gwynn is the epitome of class and kindness. We were lucky to have such an amazing player, an amazing person as a part of the Padres, and a part of our lives.
HAPPY 50TH BIRTHDAY MR. PADRE!!!

Posted by Caitcaitylin at 3:05 PM No comments:

Posted by Dr. Matthew Wion at 8:08 PM No comments:

In most of the world today May Day will be honored as a celebration of the rights of working people. This is a day to champion their cause, to celebrate their labor, and to think of ways to improve working and living conditions for working people everywhere.

In honor of May Day, I offer the following book review:

The Corporation: The Pathological Pursuit of Profit and Power by Joel Bakan

It is no secret that nearly all human societies - including our present societies - favor the rich and powerful at the expense of everyone else.

The dominant institution for implementing this type of exploitation today is the corporation. Corporations get politicians elected, take over our minds with advertising, dump pollution into our environment, and routinely commit crime upon crime.

The basic Premise of this book is fairly simple: Corporations are not run by evil people, but are systematically designed in such a way that harming and exploiting people is a necessary component of their operation. Corporations are created to maximize profit and minimize cost. Corporations are legally bound to put profit above all other concerns. These claims are backed up by an enormous amount of legal data.

The second point is that currently Businesses are insufficiently regulated and not remotely penalized severely enough for their crimes. This means that, given that their structure is to maximize profit, they will lie, cheat, fraud, and harm consumers and employees - as this is in the long run the most profitable course.

What is the solution to this? A rethinking of and legal rewrite of the purpose and function of a corporation. Instead of merely a profit making machine, a corporation, the author argues, should be highly regulated, and subject to severe penalties when it violates the law. Furthermore, social responsibility must be legally written into the charter of a corporation and the common good, not merely profit, must be part of their tasks as a social institution.

Only by so re-creating the corporation and its structures can we remove the horrible harms corporations do and make them a force for good, rather than a force for harm and destruction.

As we celebrate the workers of the world this May Day, let us not only honor their labor and speak out for their rights; let us also come to understand the systemic problem of the corporate structure which keeps them exploited.

If we are to have true rights for working people, then we must restructure the corporate machine into something very different