Palm Sunday: A Passion for Peace through Justice 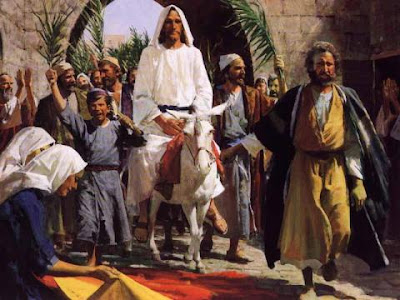 Today is Palm Sunday, the beginning of Holy Week for Christians. On Palm Sunday Jesus enters Jerusalem riding a donkey, hailed by followers waving palm branches. The action is a deliberate symbolic protest.

Biblical Scholar John Dominic Crossan pinned an article just two days ago which explains exactly what Jesus was up to:

Together with his friend and colleague Marcus Borg, Crossan wrote an excellent book a few years back with elaborates and clarifies Jesus purpose in Jerusalem: The Last Week. Early in this book they explain that:


The Meaning of the demonstration is clear, for it uses symbolism from the prophet Zechariah in the Jewish Bible. According to Zechariah, a king would be coming to Jerusalem (Zion) "humble, and riding on a colt, the foal of a donkey" (9:9).... The rest of the Zechariah passage details what kind of king he will be .... This king, riding on a donkey, will banish war from the land - no more chariots, war-horses, or bows. Commanding peace to the nations, he will be king of peace.

The kingdom of God is the heart of Jesus' life and message. Dedicated to non-violence, inclusiveness, justice for the poor and afflicted, and peace through justice for all, Jesus entered Jerusalem intentionally opposing his message and his mission to the power and injustice of empire.

The problem with Rome and the Priesthood for working so closely with Roman power. Was that this power disenfranchised, exploited, and oppressed the peasantry (a good 90% or so of the population) simply to create wealth and power for the elites.

Or to quote from Crossan once more:


After centuries of subjugation to various empires, the Jews of Jesus' time wanted to know: if God is just, and the world belongs to God, why is the world so unjust? One stream of Jewish tradition answered that question with this mantra: God will overcome, someday. At some point in the future, God would not only clean up the mess but also create a perfect world....

[To fight against Roman imperial power] Jesus told his companions to heal the sick, to eat with those they healed, and to announce that the Kingdom of God had arrived. Healing is the basic spiritual power. Eating is the basic physical power. That mutual sharing of spiritual and physical power, in a sense, recreated the sharing aspects of peasant life in contrast to the greedy life under Antipas' Romanization process.

Think about those twin aspects for a moment. Those who bring healing and those who furnish eating are not exactly in the same position. They represent, respectively, itinerants and householders. By itinerants, I mean people pushed off family farms or family boats as the New World Order arrived in Lower Galilee.

Think, for example, of how readily fishermen followed Jesus. By householders, I mean families who know how easily they could lose their own farms or boats in a changing economy. As itinerants and householders faced one another, the former saw where they had been, and the latter saw where they could be. The program of the Kingdom was to join both groups in support and common life.

In Leviticus 25:23 God says that, "The land shall not be sold in perpetuity, for the land is mine; with me you are but aliens and tenants." Land is life itself and cannot be bought and sold like other commercial commodities. In the gospels and throughout the New Testament there is little said about land and much said about food. But the continuity is clear--land is there for food, and the basis of life is land because it produces food.

In other words, Jesus challenged his hearers to disobey Roman power by living in God's kingdom here and now. In effect he claimed that Roman authority was null and void, that the Temple leadership was dissolved, and that God was ruling in our midst. No wonder the authorities killed him!

To follow Jesus, therefore, is to oppose the forces of empire and violence. To fight for the radical inclusion and healing of all people.

Palm Sunday offers us a choice: we can follow Jesus the messiah of peace and justice, or align ourselves with the forces of empire. THAT is the gospel; THAT is the passion of Holy Week.

Posted by Dr. Matthew Wion at 2:21 AM No comments:

My vision is clear now. I feel that a vast emptiness extends inside me, and all around me - so that I almost find my self to be superfluous, unnecessary. Nothing attracts me. I'm tormented by a boredom that makes life intolerable. Don't think me arrogant for saying this, but the demands of morality are too easy for me. I would eagerly do twice as much as they command. They only get their prestige from the attractiveness of sin, and it costs me almost no effort to resist that.

The commentator notes that Kant is here confronted with a Kantian moral saint. The woman has no passions and therefore simply acts out of a concern for duty alone. In a very telling passage Von Herbert wonders if Kant himself is as empty and lifeless as she is:

I beg you to give me something that will get this intolerable emptiness out of my soul. Then I might become a useful part of nature, and, if my health permits, would make a trip to Kñnigsberg in a few years. I want to ask permission, in advance, to visit you. You must tell me your story then, because I would like to know what kind of life your philosophy has led you to - whether it never seemed to you to be worth the bother to marry, or to give your whole heart to anyone, or to reproduce your likeness. I have an engraved portrait of you by Bause, from Leipzig. I see a profound calm there, and moral depth - but not the astuteness of which the Critique of Pure Reason is proof. And I'm dissatisfied not to be able to look you right in the face

Kant, unable to see this woman as anything other than a "crazy lady," dismisses her letters and refuses to respond. Ten years later she finally did commit suicide. I concede that Von Herbert is not really the "perfect Kantian" she has no passions to master. For Kant an act appears to be moral to the extent that we have mastered our natural passions which run contrary to this. But her chief motivation is duty, and her lack of passion poses no problems for a Kantian. For Kant must, in the end, regard our natural impulses and desires as something we would be better off without. Maria Von Herbert lacks these impulses and desires and the result is chronic depression. She rightly sees that Kant's philosophy pushes us all in that direction. This is a very serious problem.

Kant's total failure to see, in this woman, a profound criticism of his philosophy as lifeless is damning. I would not, however, consider it worth the bother of a blog post if this were just about Kant.

Throughout his work Kant stressed that he is simply the philosophical spokesmen for common sense morality. I fear he is right. Kant's cold, impersonal, and inhuman ethics are the logical conclusion of a very common conception of what morality is. Many of us think of morality as essentially prohibitive. It is a set of external commands that, more often than not, forces us to oppose our natural impulses and normal inclinations, that demands we obey regardless of our happiness or well-being. Kant builds his theory with the dreadful consistency of a math problem on just this conception.

One need not reflect all that deeply to see that this conception of morality and the moral life is the spider Nietzsche said it was. An ethic that makes enjoyment and character, well-being and fulfillment the enemy of duty is a sick one.

Whatever the proper theory of ethics is, this is not it.

We must think again.

The Truth about Grad School

Posted by Dr. Matthew Wion at 7:33 PM No comments:

I am not crazy about the Democrats bills for health care reform. The problem with Health care in the United States is that so much of it is left in the hands of for-profit companies. This is the reason Health care costs so much (just look at the administrative costs and the regular jacking up of premiums) and the reason so many are denied coverage and claims. The bills passed by the house and the senate leave these companies with far too much power. They should be removed from the game entirely.

To quickly illustrate the problem. For-profit companies cannot maximize profits by providing good coverage. The best, perhaps only, way to maximize profits is to raise premiums absurdly often, deny care to those who need it most, and then deny every possible claim you can for any reason at all. That's really very simple. This ends up bankrupting families, causing home foreclosures, tremendous personal debt, high administrative costs (takes a lot of paper work to deny claim after claim), lack of treatment, death, misery, and ruin. No one should doubt this. Those who do are either inexcusably ignorant and/or willingly blind.

Our health care system is (by far) the most expensive on earth (for citizens and government), the only system in advanced countries that fails to cover everyone (47.5 million uninsured and rising), and the result is higher infant mortality, a shorter life-span, more chronic illness, more bankruptcy, more home foreclosures, and more personal debt than any other advanced democracy!! No one can rationally defend so broken, perverse, and corrupt a system. Ideology is useless here. The facts cannot be denied; the system cannot be defended.

Because of this there are some liberals who argue that we should oppose the passage of these bills and give up health care as "lost again this round." Part of me agrees with them. Until profit is removed from health care coverage, the United States will continue to have a health care system that is cruel, barbaric, and inhumane.

The problem, however, is that too many people can no longer afford their premiums. Too many Americans are losing their jobs and therefore their health insurance. Too many people are denied care because of "pre-existing conditions." The situation is frankly intolerable and inexcusable.

The current bill does at least alleviate some of these problems. The bill would eliminate denying care for pre-existing conditions, regulate (albeit insufficiently) how much insurance companies can raise premiums, and expand coverage - and crucially government aid to afford coverage - to millions who are currently denied it.

This bill, in short, is essential. It is not only imperfect, but poor; and yet there are parts of this bill that will really help many people.

WE MUST PASS THIS!

Make no mistake, the passage of this bill is not a final solution. Health care coverage in this country will never be acceptable until the profit motive is fully removed from insurance. Until we adopt a system like Germany and France have - highly regulated, NON-PROFIT, but private health insurance - or simply go to a single-payer system (not my choice, but light-years better than a for-profit system), our health care will remain a cruel joke. We must return to this issue again.

But the passage of a bill which eliminates pre-existing conditions, expands coverage, and slows down the rates of rising premiums will at least do some good. This might even be the first step to a functional health care system.

Republicans will rant and rave about "big government." Let them. Idiotic and uniformed morons who foam at the mouth about "socialism" should be given no more attention than lunatics on the street who pass out pamphlets informing us that "the end of days is near."