42 - We can still learn from Jackie Robinson 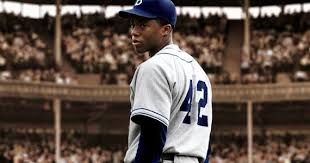 The Integration of Baseball by Jackie Robinson in 1947 is one of the great moments of American History. In fact and in legend it defines the radical injustice of legal segregation and the courage and conviction of those who dared to defy it. 42 directed by Brian Helgeland is faithful to the power of the legend and the magnitude of the history. Perfectly cast (Harrison Ford reaches new heights as Branch Rickey), the film brings all of the central characters to life. The story is moving, eliciting tears, laughs, and admiration for Jackie Robinson at all the appropriate moments. In short, 42 is a perfect Baseball film and a splendid telling of a powerful story; I enjoyed every moment of it and the movie already ranks high among my personal favorites.
Despite enjoying the film immensely, I must confess that it can be difficult viewing at times. The racism encountered by Robinson in this film (which is only a fraction of the suffering the poor man actually had to face) is rather ugly. The hatred behind racist rants against Robinson, the refusal to accept him for the color of the skin, and the common use of offensive racial slurs, is painful to watch. During one particular seen where the Phillies Manager Ben Chapman is berating Robinson with constant racial slurs, I was quite literally physically ill. The hatred Robinson had to deal with will bring tears of pain to your eyes. This makes parts of the film very hard to watch; very hard, but worth it. We need to see how ugly racism and other forms of hate are. We must not shield ourselves from this disgusting and shameful aspect of human behavior.
As fine a film as 42 is, there are two aspects to this film that are lacking. First, both Jackie Robinson and Branch Rickey were devoutly religious men – both were Methodists in fact!. God was central to each man's life. I would have appreciated a slightly larger amount of screen time devoted to the spiritual basis of each man's story. But this is a minor quibble. The film is made for a mass American audience and it is largely about the struggle for integration. The second omission is more disconcerting. Absent from 42 is the large social movement, which existed for decades before Robinson played the game, to integrate the national pastime. The film rightly focuses on the courage and heart of Jackie Robinson, but a nod or two in the direction of the social movement that gave integration so strong a push would have been nice. Mr. Robinson and Branch Rickey did not break the color barrier in baseball by themselves. Despite their remarkable achievements, it takes a community of people committed to justice in order to truly achieve it.
Despite these flaws the film is amazing. Most importantly is provides an opportunity for families and communities to talk about discrimination, bigotry, and the struggle for justice. This is must see film for all of us. Jackie Robinson's battle is our battle; the Battle for recognition of our common human dignity. To quote from the film “maybe tomorrow we'll all wear 42, so they can't tell us apart;” perhaps we should.