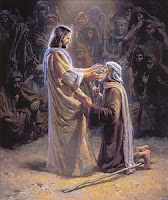 A while back I wrote a blog post in which I asked my readers to imagine how Jesus would have treated people who came to him to be cured if he operated like a Health Insurance Company (See "If Jesus were a Health Insurance CEO." I think that the question of religious faith and universal health care is an important one.

On that note, I am going to refer the reader to two pieces from the Washington Post "On Faith Panel"

First, Jim Wallis explains the rules for Health Care found in Leviticus, the basic idea was that everyone in Israel must have health care whether they could afford it or not.

Second, Aana Marie Vigen argues that anyone who follows Jesus is committed to making sure that all people have access to health care. In other words, Health care is a right. Furthermore, Vigen argues that a strong public option is the best way currently under discussion to ensure the christian duty to provide affordable and universal coverage.

I confess that I cannot understand how anyone could claim to be a follower of Jesus and think it is acceptable to live in a world where anyone is denied care, or even in a world where people regularly fall into debt and go bankrupt because of their medical bills. This seems utterly wrong for those who follow a man who preached "good news to the poor" and spent all his time healing the sick (without asking for a premium by the way).

As for the public option? A public option is a proposal that if passed would simply be a government funded insurance option that would force private insurance companies to provide better coverage at lower costs. The CBO estimates that no more than 12 million people would enroll in said public option. The bills that include have crafted in a way that it can't have an unfair advantage over private plans, and public plans work well in other countries and even in our own (Medicare) without any of the horrors that its opponents fear. Nor is it too expensive, simply reversing the Bush tax cuts, or cutting unnecessary subsidies by medicare to private insurance companies, or curbing unnecessary military spending, or not invading another country like Iraq, would provide far more than enough money to pay for the change. All a public plan will do is cut costs, and improve quality of care.

And people who follow the healer from Nazareth oppose this?!