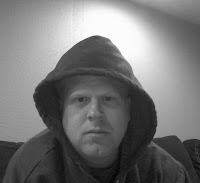 This Picture of me in a hoodie is my expression of Solidarity with the family of tragically slain teen Trayvon Martin. Many of us in America support justice for this poor kid and our hearts go out to his family. All too often young black men are killed because of "mistaken identity" or just plain racism, and it is shamefully common for their killers to escape any punishment for their crimes.
If you don't yet know much about the tragic murder of Trayvon Martin, Here is the tragic tale as reported by Mother Jones Magazine (if you click on the link you can see updates, comments, video and audio):

On the evening of February 26, Trayvon Martin—an unarmed 17-year-old African American student—was confronted, shot, and killed near his home by George Zimmerman, a neighborhood watch captain in Sanford, Florida. Zimmerman has not been charged with a crime. Since Martin's death and the revelation of more details, the case has drawn national outcry and sparked hot debate over racial tensions, vigilantism, police practices, and gun laws.

What happened to Trayvon?

Martin, a Miami native, was visiting his father in Sanford and watching the NBA All-Star game at a house in a gated Sanford community, the Retreat at Twin Lakes. At halftime, Martin walked out to the nearby 7-Eleven [1] to get some Skittles and Arizona Iced Tea. On his return trip, he drew the attention of Zimmerman, who was patrolling the neighborhood in a sport-utility vehicle and called 911 to report "a real suspicious guy."

After discussing his location with the dispatcher, Zimmerman exclaimed, "Shit he's running," and the following sounds suggest he left his vehicle to run after Martin."This guy looks like he's up to no good or he's on drugs or something," Zimmerman told the dispatcher. "It's raining, and he's just walking around looking about." The man tried to explain where he was. "Now he's coming towards me. He's got his hand in his waistband. And he's a black male...Something's wrong with him. Yup, he's coming to check me out. He's got something in his hands. I don't know what his deal is...These assholes, they always get away."

"Are you following him?" the dispatcher asked. Zimmerman replied: "Yep."

"Okay, we don't need you to do that," the dispatcher warned.

Several minutes later, according to other callers to 911 in the neighborhood, Zimmerman and Martin got into a wrestling match on the ground. One of the pair could be heard screaming for help. Then a single shot rang out, and Martin lay dead.

Are the 911 recordings available to the public?

Yes. After public pressure, the city of Sanford played the tapes for Martin's family, then released the audio recordings. Here are some excerpts. You can also read a full transcript of George Zimmerman's initial police call here, along with an examination of whether he used a racial epithet, as some listeners have suggested.

What happened to the shooter?

So far, not much. Zimmerman told police he'd acted in self-defense. ABC News reports [8] that he had wanted to be a police officer, and Sanford police didn't test him for drugs or alcohol after the shooting (such tests are standard practice in homicide investigations). He was licensed to carry his gun, and police initially told Martin's father [9] that they hadn't pressed charges because Zimmerman was a criminal justice student with a "squeaky clean" record.

That wasn't entirely true, however; in 2005, Zimmerman was arrested for "resisting arrest with violence and battery on a law enforcement officer"; those charges were dropped. Media investigations and Martin family attorneys suggest [1] that Zimmerman was a vigilante with "a false sense of authority" in search of young black men in his neighborhood. Police records show Zimmerman had called 911 a total of 46 times [1] between Jan. 1 and the day he shot Martin. (Florida guidelines for licensed gun owners [10] state: "A license to carry a concealed weapon does not make you a free-lance policeman.")

How are Florida's self-defense and "stand your ground" laws key to this case?

Zimmerman may have benefited from some of the broadest firearms and self-defense regulations in the nation. In 1987, then-Gov. Bob Martinez (R) signed Florida's concealed-carry provision into law, which "liberalized the restrictions that previously hindered the citizens of Florida from obtaining concealed weapons permits," according to one legal analyst. This trendsetting "shall-issue [11]" statute triggered a wave [12] of gun-carry laws in other states. (Critics said at the time [13] that Florida would become "Dodge City.") Permit holders are also exempted from the mandatory state waiting period [14] on handgun purchases.

Even though felons and other violent offenders are barred from getting a weapons permit, a 2007 investigation by the South Florida Sun-Sentinel[15] found that licenses had been mistakenly issued to 1,400 felons and hundreds more applicants with warrants, domestic abuse injunctions, or gun violations. (More than 410,000 Floridians have been issued concealed weapons permits.) Since then, Florida also passed a law [16] permitting residents to keep guns in their cars at work, against employers' wishes. The state also nearly allowed guns on college campuses last year, until an influential Republican lawmaker fought the bill [17] after his close friend's daughter was killed by an AK-47 brandished at a Florida State University fraternity party.

Florida also makes it easy to plead self-defense in a killing. Under then-Gov. Jeb Bush, the state in 2005 passed a broad "stand your ground [18]" law, which allows Florida residents to use deadly force against a threat without attempting to back down from the situation. (More stringent self-defense laws state that gun owners have "a duty to retreat" before resorting to killing.) In championing the law, former NRA president and longtime Florida gun lobbyist Marion Hammer said [19]: "Through time, in this country, what I like to call bleeding-heart criminal coddlers want you to give a criminal an even break, so that when you're attacked, you're supposed to turn around and run, rather than standing your ground and protecting yourself and your family and your property."

As Melissa Harris-Perry has noted this kind of tragic killing of young black men is all too common. And sadly, it is almost equally as common that their killers go unpunished. This is simply intolerable. We have to take a stand and stop this. Let's make the world a more just place, let's fight to end tragedies like that of Trayvon Martion