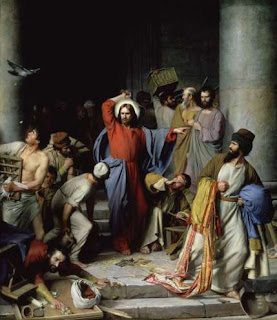 In the schedule of Holy Week, Monday is the day that Jesus "Cleansed the Temple." For those who don't quite recall the details of that event, here is the incident as described by the earliest gospel Mark:


Then they came to Jerusalem. And he entered the temple and began to drive out those who were selling and those who were buying in the temple, and he overturned the tables of the money changers and the seats of those who sold doves; and he would not allow anyone to carry anything through the temple. He was teaching and saying, "Is it not written, 'My house shall be called a house of prayer for all the nations'? But you have made it a den of robbers. (11: 15-17)

There is a long-standing, but misleading, tradition that sees Jesus as acting out of anger. On this view, he is angry that commerce is defiling the Holy Temple. Scholarship has largely discredited this common misreading of Jesus' action in the Temple.

Rather than throwing a "temple tantrum," Jesus is acting out a deliberate demonstration against the temple and its authorities. The commerce performed by the merchants was necessary in order to keep up the sacrifices. You had to change impure Greek and Roman coinage for pure Temple coins. This was a legitimate and proper function for Temple sacrifice. The temple could not work without these merchants.

In other words, by tossing over the tables of the money changers and prohibiting entrance to the temple (this would have had no real effect, given the temple's size. It is a symbolic protest), Jesus is symbolically destroying the Temple. His actions indicate that it's function is invalid. Jesus, acting in the name of the God of Israel, declares by his deeds that the temple and the authorities running it are null and void. They do not speak for God. They do not have legitmate status in the God of Israel's eyes.

But why would Jesus do this?

The Temple authorities were the native ruling elites who made a fortune by cooperating with Roman rule and power. As such, they profited by helping Rome exploit and demean the Jewish peasantry. In particular, Roman commericial agriculture robbed many Jewish peasants of their land, and pushed far too many people to the margins of society and beyond. Roman rule defied the Torah's notion of land ownership, and the distributive justice of the Jewish God.

For many Jewish peasants, the Priests and the Temple, no longer represented the Jewish God of justice, but rather his opposite, the gentile overlords who harmed the great majority of Jewish Peasants.

So in the name of the Jewish God of liberty and justice, Jesus condemns the Temple and its leaderships. He declares that far from speaking for the God of Israel, they speak against him; as do their Roman masters.

The meaning of Jesus' Temple actions was not lost on the Temple leaders, nor on Pilate. They quickly arrested him and crucified him. They got the message and promptly tried to destroy the messenger.

It is clear to me that those of us who follow Jesus today must do as he did. We must stand against the power structures in our own society that, like the Roman Empire of old, exploit the masses of the population in order to benefit the wealth and power of a narrow few.

For me that means we need to involve ourselves in Occupy Wall Street. This, in the United States today, is the true democratic movement (or at least has the potential to be) of our times. The 99% movement identifies the real problem, Plutocracy and Corporate power, calls it out, and seeks to find solutions to it.

Let's do as Jesus did: let's toss the money lenders from the Temple and condemn the "den of thieves" for the crooks they are.