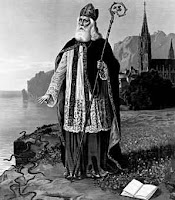 Saint Patrick's day as we know it is a uniquely American phenomenon. We have created a holiday in which everyone wears green, drinks themselves into a stupor, and brags that they are 1/16 Irish.

The real holiday, it seems to me, is a commemoration of a passionate and dedicated man, St. Patrick, and a unique and marvelous People, the Irish.

Irish Christianity is quite unique and I've always found it rather appealing, as is Irish culture generally

Not much is known about St. Patrick. But he did write a book, The Confessions, which I find splendid reading. In it Patrick explains his own experience as a slave in Ireland. He was not originally from Ireland, but only went there as a slave. Eventually he escaped, years later returning to Ireland as a bishop. Apparently the motivation for his return was, in part, to transform Ireland into a land of freedom.

St. Patrick, almost uniquely before the 19th century, opposed all slavery. Having been a slave himself, St. Patrick could not stomach this awful institution. He also had, for his time, unusually egalitarian views about women.

Check out this fascinating piece from Slate about the life and passion of Saint Patrick.

So instead of drinking ourselves into a coma, or glibly pretending to be Irish, let us remember Saint Patrick's passion for a world in which slavery is ended, and people live together in peace. Let us equally remember the pursuit of freedom that marks the Irish people as a whole, and then perhaps we can finally really be proud of that 1/16 of us that is Irish.
Posted by Dr. Matthew Wion at 10:48 AM